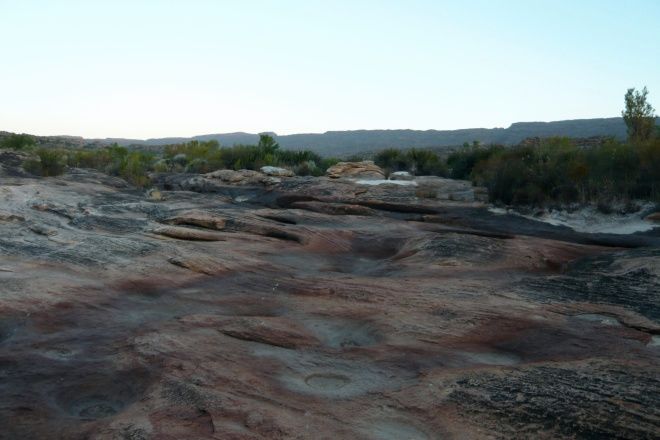 Rich in scenic beauty, wide open spaces, soaring mountain peaks, craggy outcrops and a great diversity of flora, the Cederberg is a popular destination for outdoor enthusiasts, hikers and mountaineers as well as those seeking a serene and peaceful retreat. Approximately 200km's from Cape Town and stretching for about 70km's from Citrusdal to Clanwilliam, the Cederberg mountain range is a proclaimed wilderness area incorporating some 130 000 hectares.

The Cederberg is famous for its spectacular rock formations, some of which we deposited in the area between 500 and 345 million years ago. Years of erosion have created unusual rock formations, crevices and outcrops and a variety of well-laid out hiking trails traverse the reserve leading to points such as the Maltese Cross, the Wolfberg Arch and Wolfberg Cracks amongst others. The mountains also provide excellent opportunities for rock climbing, and the caves and overhangs are home to some fine displays of San rock art, reminders of the lives led by the early Bushman inhabitants of the area.

The Cederberg was named after the Clanwilliam cedars which used to flourish in this mountainous area - not in fact cedars, but rather a species of cypress indigenous to South Africa. The extremely unique and rare white snow protea can also be found here, high above the snow line on the mountain slopes and blooming in March. The main campsite in the area is Algeria.