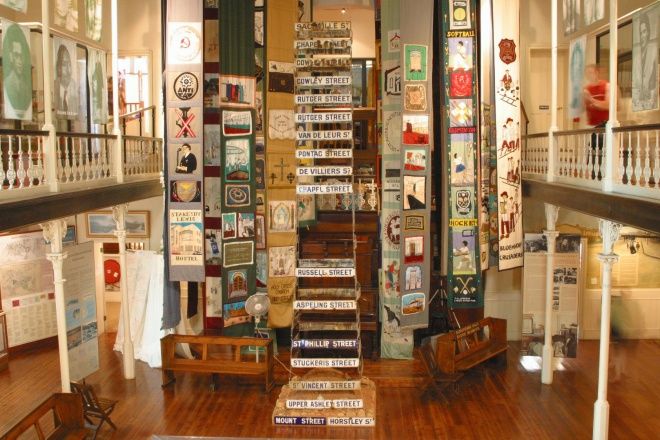 The city centre of Cape Town, in or near to the Company Gardens, is home to three main museum complexes. The biggest and oldest museum is the South African Museum that was founded in 1825 and is the oldest museum in sub-Saharan Africa. Mainly showcasing South Africa’s Natural History, the South African Museum has some very interesting displays of anthropological natures. Adjacent to the Museum is the Planetarium where daily shows take visitors into the amazing world of outer space where planets and shooting stars, galaxies and comets all come to life.

Also located in the Company Gardens in a beautiful Edwardian building, the South African National Gallery exhibits collections of contemporary, Dutch, British and French Artists. The exhibitions show paintings, sculptures, photographs, masks and puppets. The Gold of Africa Museum housed in the historic Martin Melk Huis showcases the gold treasures of Africa and depicts the artistry of ancient African civilizations.

Just before the entrance to the Gardens, lies the Slave Lodge. Built in 1679 by the Dutch-East India Trading Company, this single-story building was used to accommodate about 600 slaves. At the same time it also served as a mental asylum and a prison. In the year 1810 a second story was added and from then on it housed the High Court. Today the museum is dedicated to different aspects of the history of Cape Town with its big collections of ceramics, tools, toys, textiles and jewellery.

The District Six Museum in Buitenkant street is dedicated to the memories and experiences of the thousands of families who were forcibly removed from District Six under the Group Areas Act under the regime of Apartheid and the Bo-Kaap museum is one of the oldest houses in the traditionally 'Malay Quarter'.

Other sites of interest include the Michaelis Collection, Koopmans-de Wet House, Rust en Vreugd and the Manor House at Groot Constantia.