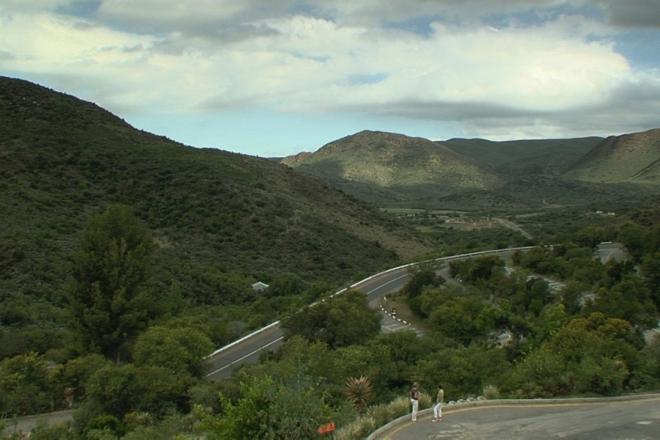 The spectacular Swartberg mountains (Afrikaans for Black Mountain), run roughly east – west along the northern edge of the Klein Karoo and form a barrier between the Klein and Great Karoo. Characterized by soaring rocky outcrops and deep gorges, the Swartberg Mountains were once thought to be impenetrable with most of the mountain being above 2000m high. The Swartberg Mountains are the tallest range of mountains in the Western Cape. Today, three breathtaking passes wind through the mountains linking the interior of the Great Karoo with the towns of the Klein Karoo and the coast beyond. Navigating the passes combines a thrilling experience with unforgettable scenery and views.

The steep and winding Seven Weeks Pass links Laingsburg and Calitzdorp and closely follows a stream through the mountains. Constructed mostly by convicts, the road was completed in 1862 and the remains of one of the convict’s camps can still be seen.

Perhaps one of the most awe-inspiring passes in the world, the Swartberg Pass was opened in 1888 and the untarred road twists and turns to some 1577 metres above sea-level with extremely steep gradients and sharp cutbacks revealing spectacular views at every turn. The road was engineered and supervised by the legendary Thomas Bain and similarly to most of his projects was constructed with mostly convict labour. Remains of the old convict camps and an old tollhouse can be seen along the way.